Dunes are not only composed of sand, they may very well also contain coarser material, provided adequate wind speeds. This coarser material also allows higher slope angles than those usually observed with sand. The mechanism of dune formation works as follows (Fig, left): An obstruction creates a resistance to the wind power with a windward and a leeward side. Material which is transported by the wind over the crest of the dune falls on the leeward side to the ground. In part, it also accumulates in the area of the ridge, becomes unstable, and then slides to the bottom. Typical of this mechanism (apart from the slope slides) is the constant angle of repose. It is almost the defining characteristic sign of dunes (slip face). Changing wind directions and varying amounts of material available at times create a vast variety of dune shapes, which can also partially overlap (Fig., right and bottom). With different wind directions a dune itself can be an obstacle to form a new dune. A new ridge crest arises, but it is typically smaller because it started later. Thus, a typical so-called dendritic pattern with smaller and smaller ridges emerges. When more material is deposited on the windward side than is blown over the crest to the leeward side, the dune grows in height. But at the same time the wind speed on the windward side increases because of the morphology of the dune, thus increasing the amount of transported material. Therefore, at some point an equilibrium, at least under present conditions with relatively little material in the atmosphere, is reached. Where this balance lies in the above comet-scenario is still an open question. But today’s maximum altitude of 250 meters should be exceeded many times over and compete even with mountains. 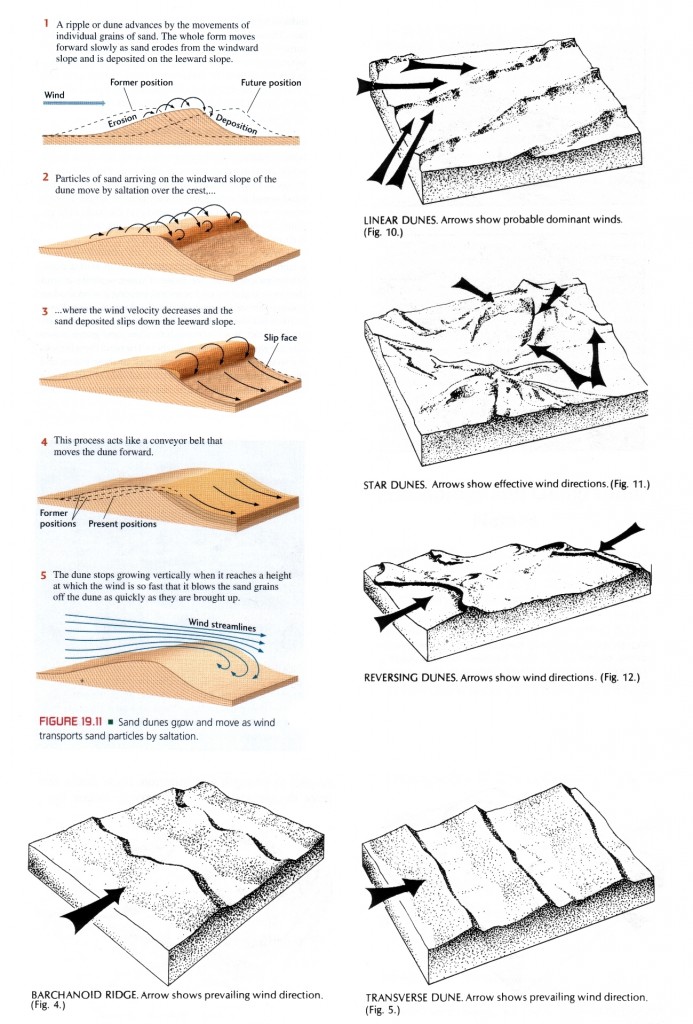 Cooke, Ronald U. and Warren, Andrew (1973): Geomorphology in Deserts, London