What could cause a flow of electrical current on the Earth’s surface? How could it be imagined?

In an electric universe a comet is not a dirty snowball from the alleged Oort cloud or the Kuiper Belt of our solar system. It is a normal part of the planetary system, as other meteorites, asteroids or even planets. Its special feature is the highly elliptical orbit, which means that its divergent electric potential, when balancing itself out with the environment or other bodies in the solar system, shows clearly visible and measurable electrical responses. The coma of the comet and its tail are the result of these activities, by which in a process similar to Electrical Discharge Machining (EDM) [Tao] parts of the surface of the comet nucleus are removed and accelerated in jets into space.

The Aurora Borealis and the Aurora Australis are today’s visible effects of a stable electrical system on Earth. In the normally harmless light phenomena over the poles where the current weak interaction with the sun reaches the deeper layers of the atmosphere, its filamentary structure suggests what to expect from a greater interaction, at least 100-fold for example [Peratt, 1204]. It is to be expected that those ‘glow-mode’ phenomena would reach the surface and move over it like curtains. The filamentary, fractal structure characterizes the typical compression behavior of Birkeland currents, known as the Bennett-pinch (z-pinch). In the center of each pinch, heat and pressure are created. Other areas will be less affected. This mechanism could be responsible for the external origin of granite and proto-granite, as well as the rounded granite boulders (erratics) which could be created in a highly polluted atmosphere with a lot of dust in the air and simply rain down on the surface.

If the intensity of the electric power exchange builds up further by increasing the density, the so-called ‘arc-mode’ can be achieved. In this case, enormous electric currents in the form of lightning strike horizontally over the surface, preferably following streams and valleys, colliding with canyon walls, “flowing” over obstacles, etc. Electrical “impact” sites would also be observable.

A potential candidate for such an impact site is the Brandberg Massif in Namibia. This is only one of many similar looking sites distributed over the entire globe. Discharges from an anode produce elevated circular areas [Otte 2008, 488]. Another feature of this distinctive type of discharge is the possible presence of rare earth minerals and precious metals. In addition to direct electrical transmutation, the so-called Marklund convection [Marklund] can be considered as a possible cause for these concentrations. With these convections within Birkeland currents, materials are sorted according to their ionization potential. 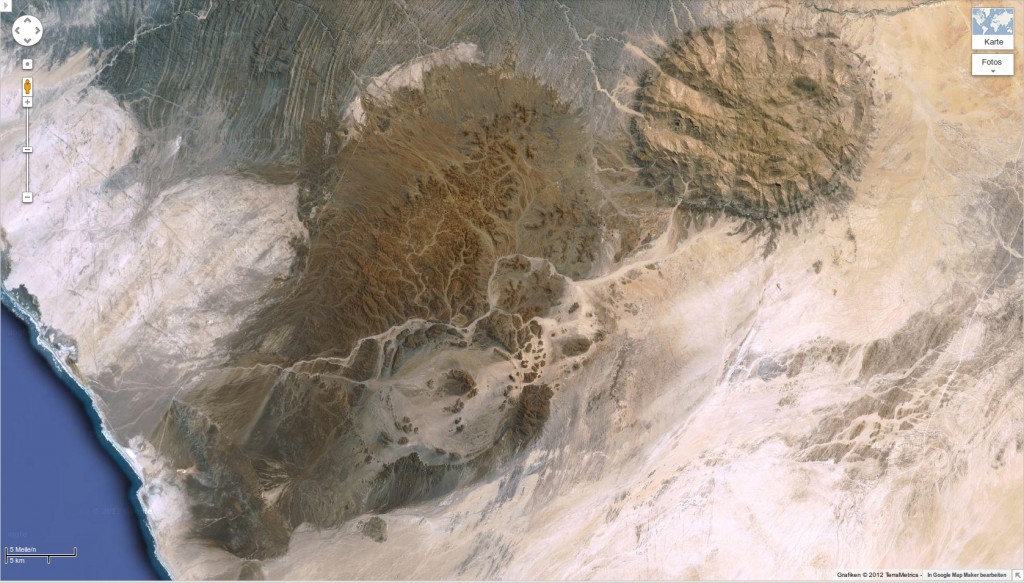 An interesting addition to the protrusion known as Brandberg Massif is the nearby depression located south-west of it, called the Messum Crater – conventionally of volcanic origin. Steinbacher has speculated that a cathodic discharge may have accompanied the discharge that produced the Brandberg Massif. This would have excavated material over a circular area, leaving the flat floor, “pinched up” double rim, and central peak, which are typical of electrical-scarring craters on such extraterrestrial bodies as the Moon and Mars. A visually similar, albeit much smaller, constellation is found on the Sinai peninsula. 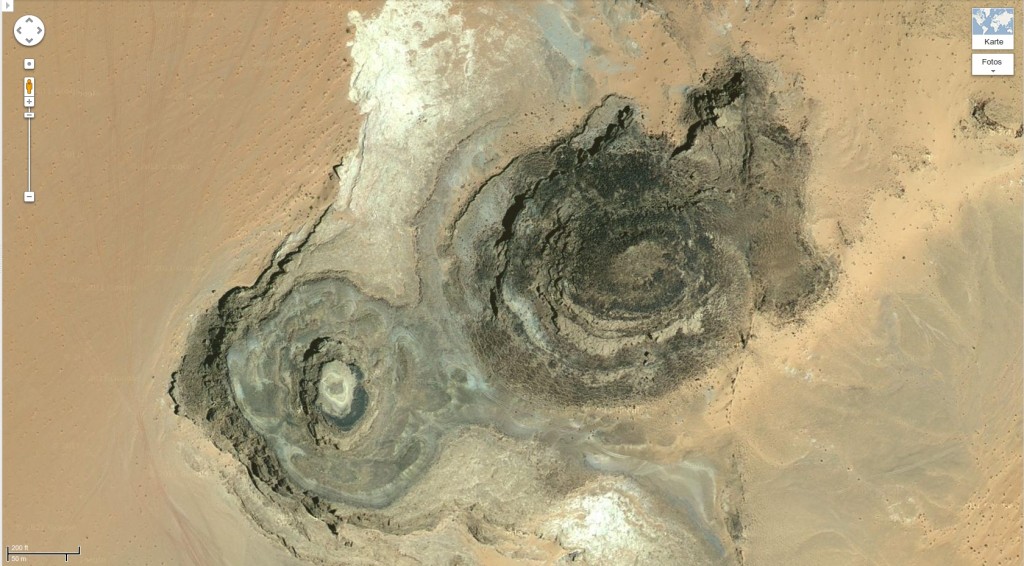 The intensity of horizontally flowing currents following the Earth’s surface would increase when they are cramped in space, such as happens within canyons. Depending on the existing base materials, varying current, and density, the current flow is affected in different ways. A variation is observed in Whitewater producing granites. Another example can be seen in Mosaic Canyon in Death Valley. Where the canyon is narrow, it consists of marble on both sides and on the floor. Marble is a metamorphic rock with at least 50% calcite, dolomite or aragonite – it contains carbonates. Something has changed these carbonates into marble. 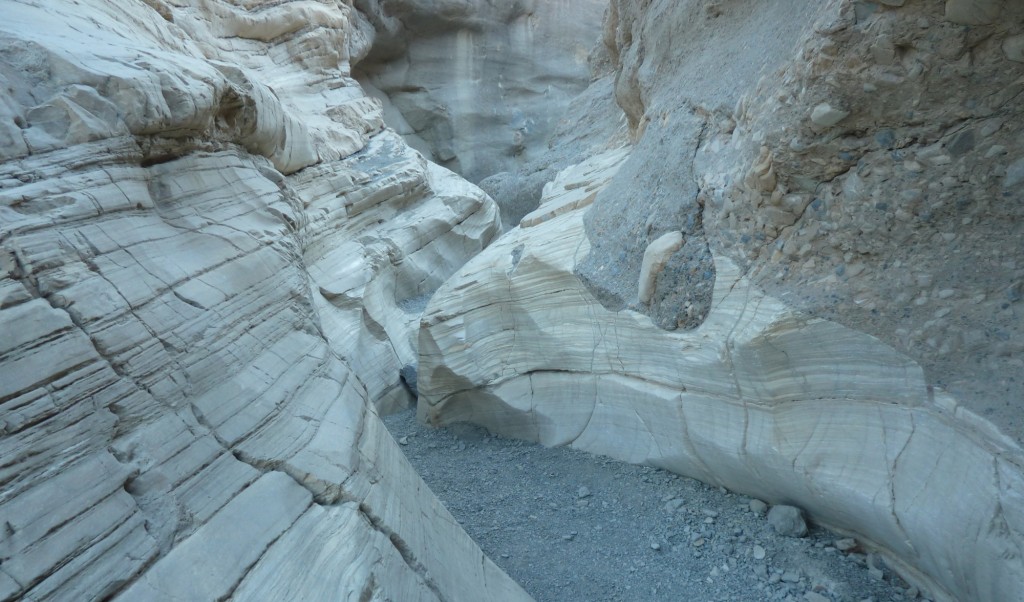 The bottom layer, as well as the patches of compacted conglomerate visible on the right side of the above picture, were brought in later and defied the water erosion in the side indentations of the marble. For long stretches the sides of the canyon show a typical dune structure that has survived in spite of a metamorphic phase. In an electrical sequence, one would assume that during the first phase dolomite-dunes were electrically petrified, then transformed in a second more energetic phase at the canyon bottlenecks into marble. The picture of the canyon changes as soon as it widens. The metamorphic character of the rock disappears immediately.

In the classical geological model the canyon is narrow exactly where it is because there is harder rock which resists erosion better. But why exactly there? And why can such formations as in Mosaic Canyon survive the tour in the geological elevator relatively unscathed, which is required for the metamorphic rocks of this type to generate the necessary conversion pressure and temperature?

The geology of the Electric Universe presents for the process of rock metamorphism at least a new way in which, through the Bennett-pinch, high temperatures and pressure can be directly achieved on the surface or close to it. 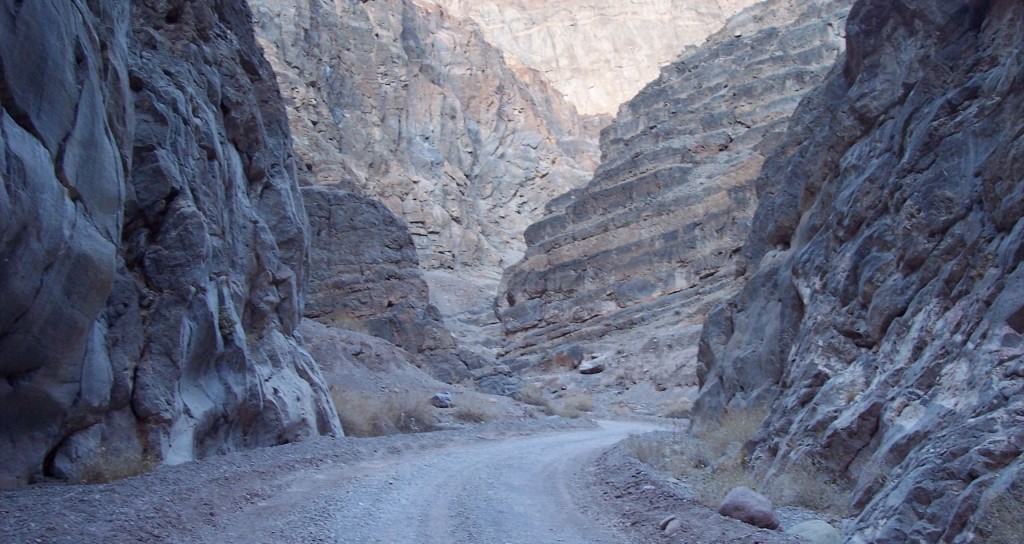 Another similar example from Death Valley is Titus Canyon. The canyon is quite narrow in places and only accessible as a one-way street. Its walls consist at the bottom of the narrows of dark marble. The mountains, through which the canyon leads, have a significant dune structure, although towards the side of Death Valley the mountains look (electrically?) milled. How might this canyon have originated?

Flowing water prevents or at least hinders the formation and enlargement of a dune. An existing water flow will ensure that material blown in by wind will be removed while the dunes grow all around and petrify in a first electrical phase. In a second phase by an electrical event in the interior of the Death Valley, a discharge current could race against the water stream up the canyon, transforming the dolomite into marble. It is visible that where the discharges on their way through the canyon would meet the canyon walls almost perpendicularly, the marble is the most extensive. About 50 cm above the current road, “holes” can be found in the rock, opposite to the direction of the water flow and where electrical discharges coming up the canyon would meet the walls. They could therefore very well be electrical in origin. 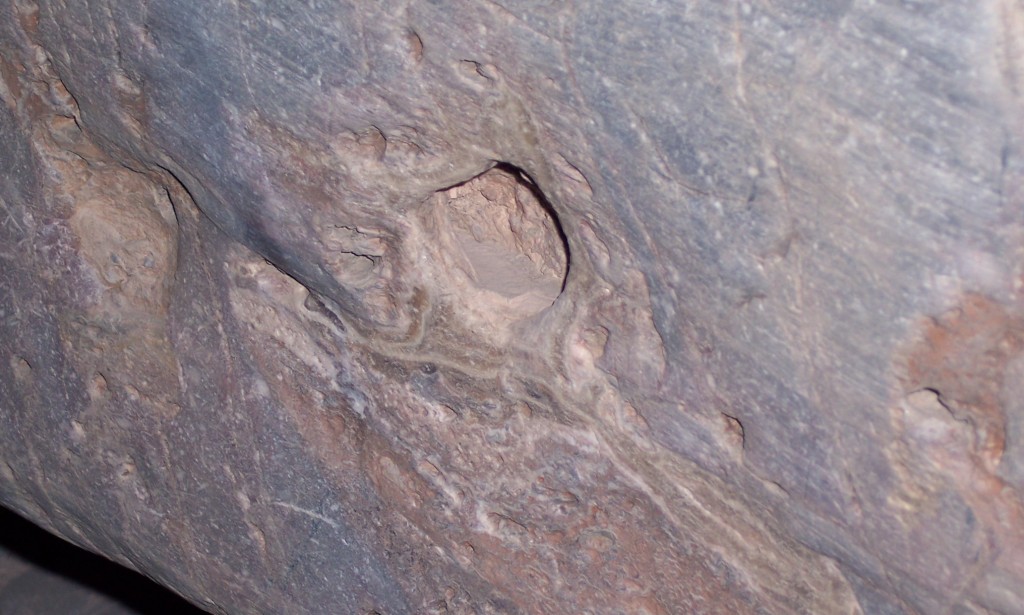 Sidewalls in Titus Canyon with “holes”

In the standard geological model, the mountain canyons in Death Valley were created as a result of dislocations and water erosion:

Stream gradients increased on flanking mountain ranges as they were uplifted. These swifter moving streams are dry most of the year but have nevertheless cut true river valleys, canyons, and gorges that face Death and Panamint valleys. In this arid environment, alluvial fans form at the mouth of these streams. … Slot canyons are often found at the mouths of the streams that feed the fans, and the slot canyons in turn are topped by V-shaped gorges. This forms what looks like a wineglass shape to some people, thus giving them their names, “wineglass canyons”. [Wikipedia / Geology of the Death Valley area]

Anyone who enters the steep cut of Titus Canyon may have reasonable doubt that it was largely created by water erosion.