In over 300 years Stensens original principles have remained basically unchanged, only in some details small adjustments have happened. During Deepwater drilling for example only semi-solid sediment layers were found until a depth of 400-800 m [Berthault, 2002, 442]. According to Stenson within a few meters depth, solid sediment layers would be expected if the process of deposition was interrupted until the deposited stratum got a firm consistency. 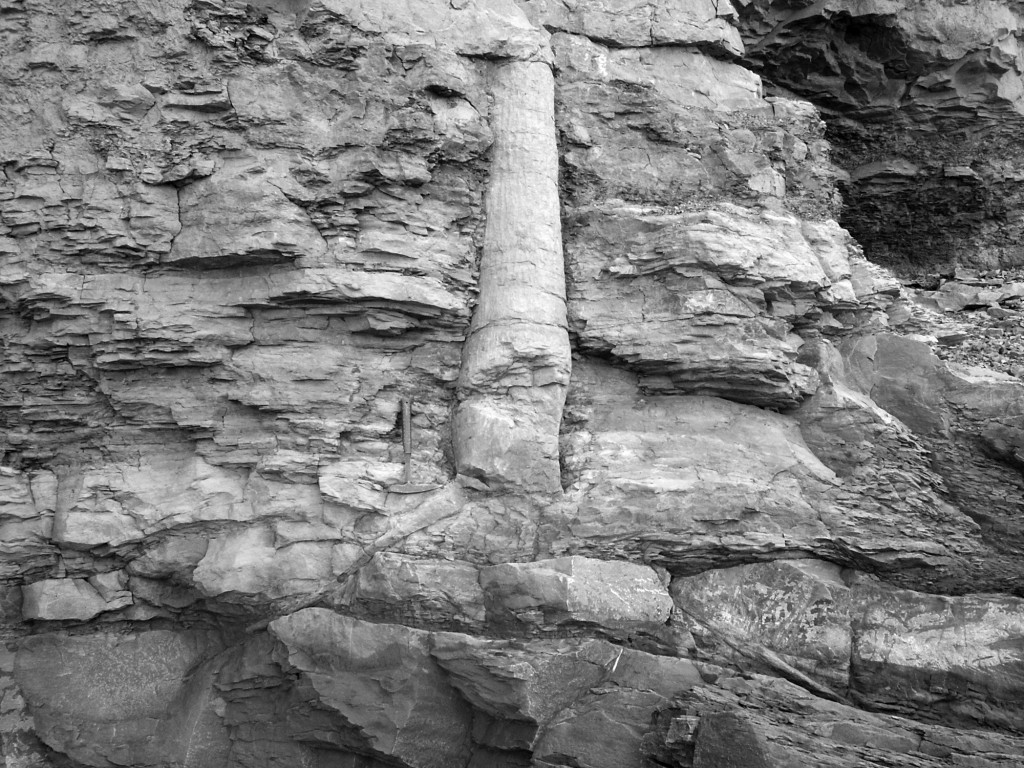 Even with an uniformitarian attitude an uneven rate of deposition of sediments is by now recognized. The figure above shows a tree fossil, that enforces a faster sedimentation process than would have been accepted by Charles Lyell. If the formation of sediments had happened in the standard geological time frame, the tree would have almost completely rotted away during the process and would not have survived in this form. Catastrophic events play a role that is now very well accepted regarding the height of deposits and the duration of their creation. This has had however no significant influence on the overall chronology, which has not changed fundamentally since the beginning of the 20th century. Instead, rapid sedimentation in the uniformitarian model is followed by long breaks, so the predefined “mean geological  chronology” can be met.

Also the basic principle of superposition is still largely untouched by catastrophic adjustments, despite existing experimental results, which also draw this principle into question. A critical examination of the basic assumptions, based on experiments, was already performed a few years ago by Pierre Y. Julien and Guy Berthault [Julien etc. 1993, Berthault 2002]. The experimental investigations focused on two areas: the formation of the lamina and stratification.

The term lamina describes the smallest unit of sedimentary structures – a single layer of a differently colored sediment. Even without the interference of a flow, only with the introduction of mixed non-uniform material, lamina are created. There appears to exist a sorting process directly during the deposition. 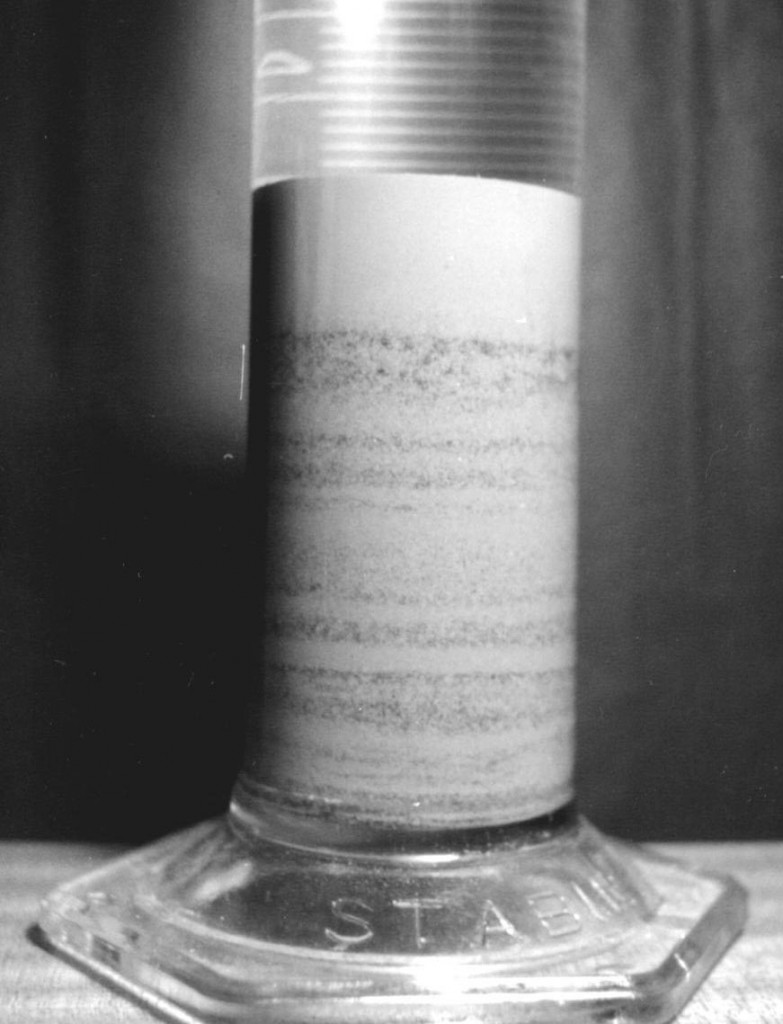 The thickness of the lamina is independent of the sedimentation velocity, but increases with the size difference of the scattered material. Under the action of a horizontal flow lamina are formed in the flow direction. Another factor is the drop height of the material, increasing fall height results in the lamina eventually disappearing as well as coarsening the material. The formation of lamina is also independent of a surrounding liquid or gas. Even under a vacuum lamina are forming. Finally, lamina follow the angle of the strata on which they form. The following figure shows an example with more than 30° slope. 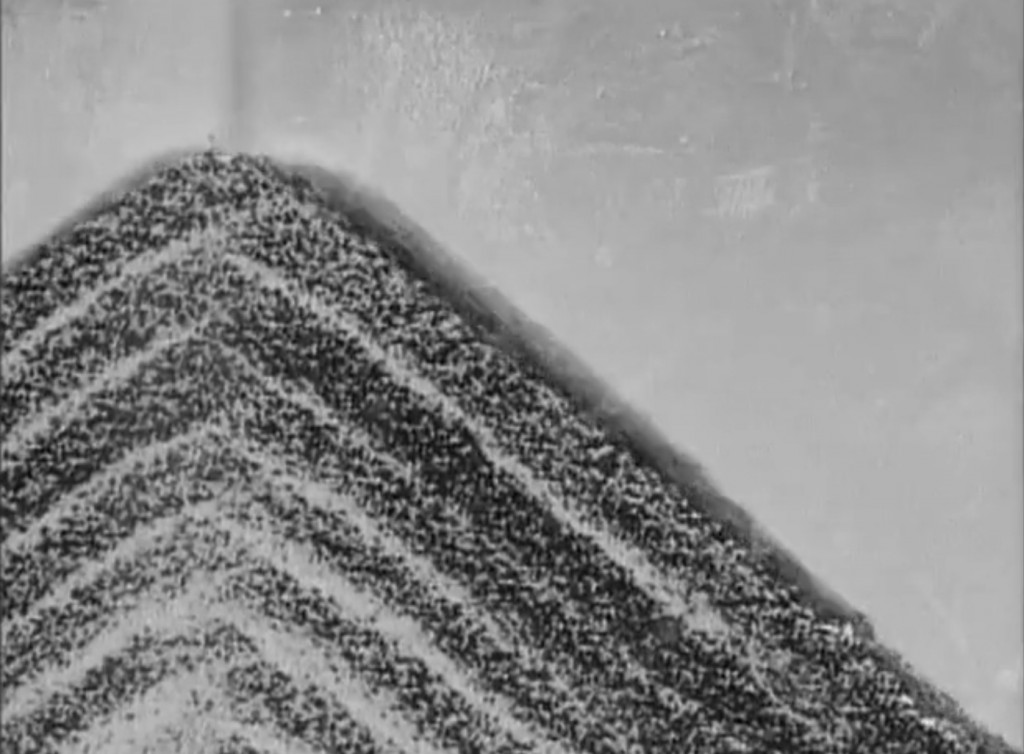 For the larger stratification experiments at Fort Collins Hydraulics Laboratory at Colorado State University an artificial recirculating water channel was used. The material was added continuously at a variable flow rate. It was found that several layers could be created in parallel in the direction of the flow. A bottom layer of fine particles formed on which the coarser particles were rolling. On the coarser particles formed again with a layer of finer particles (A). Such layer group builds up in the flow direction, sometimes in several group in parallel. With this result it has become clear, that the younger layers not necessarily formed in the upper layer, but instead the vertical strata group at the forefront of the stratification in the flow direction is the youngest. The chronology of the layer formation under flow conditions is very different from one in stagnant waters. B shows with lines t1, t2 and t3 the time course of layer formation. Videos on the Web page Sedimentology [Berthault 2009] show the process and the experiments described here. The consideration of these videos is highly recommended for understanding the process. 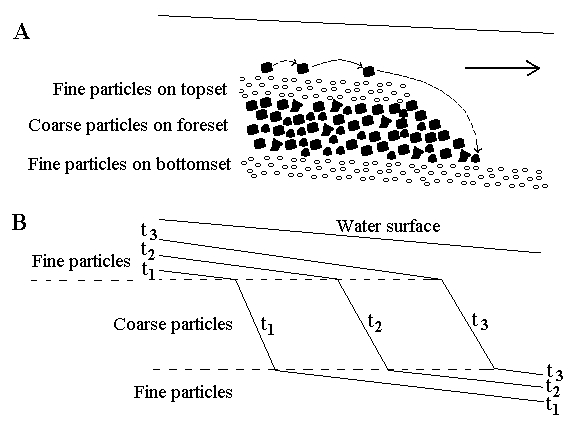 Creation of stratigraphy under a current flow (Berthault 2002, 444)

Berthault, Guy (2002): Analysis of Main Principles of Stratigraphy on the Basis of Experimental Data; in Lithology and Mineral Resources; Vol. 37, No. 5, 442–446