The valleys of the American Southwest show enormous fillings with sediment. For example, in the area of Westmoreland gravitational measurements found depths of approximately 5.5 km [Biehler, 84-85]. At Las Vegas, depths of 5 km were found [Rodgers/McCallen]. A global map of sediment reveals some interesting facts: 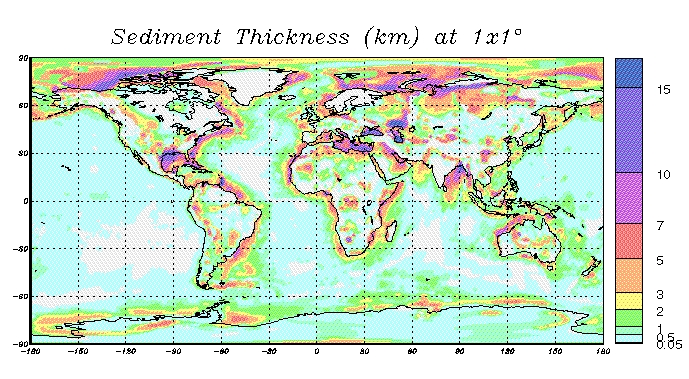 In particular the sediment in the Arctic Circle region is very puzzling. In the Gulf of Mexico, the eastern Mediterranean Sea, the Black Sea, the Caspian Sea and the Bay of Bengal, the sediment could be attributed to large river deltas, but this is more difficult with the polar area.

Alternative considerations for sedimentation were presented in Stratigraphie und Chronologie [Otte 2011] (partially translated here). By means of experiments, it can be shown that sedimentation, given enough current and saturated material, is not a slow vertical process that sets stratum upon stratum, but that this process can push horizontally very fast in the direction of the current flow with many strata in parallel. Thus, the resulting sediment from the process is over the whole height fresh and soft. Michael Steinbacher calls the sediment generated this way a “slurry runoff”, a wet-concrete-like mass which even shows the typical raised lip at the end. As the primary source of the sediment, comet dust comes again to mind, which would be collected by mountains and dunes from the atmosphere with the snow-fence principle.

Given a scenario in which large areas of the continents were flooded with strong currents, basins could sediment in a relatively short time to just below the water level. If then the water level falls again, rivers which flowed through a basin before the flood would carve through the fresh formed sediment with a strong current and high amounts of water and create deep canyons within a short time frame. A subsequent electrical event would be able to solidify the remaining fresh sediment into stone. The washed out sediment material would fill downstream valleys in large quantities.

The endpoints of such a sedimentation process would have to show up as tabs of sediment in the area. Candidates for this are for example structures east of St. George (Utah) and south of Hurricane. Mesas need to be differentiated from this scenario. They are created if one or more rivers have eroded the fresh sediment away up to a few spots. The Virgin River flows north from Hurricane from east to west and appears to have intersected and eroded a sediment flow that took place from north to south.

A similar example can be found to the northeast. The Colorado cuts here through the area from east to west. North of Grand Junction, where the Gunnison flows into the Colorado, the Book Cliffs cannot be overlooked. Here again appears to be a sediment flow coming from the north or northeast to be carried forth over the Colorado, because south of the Colorado end-tabs can be found, while further south valleys carry little or no sediment. Again, the Colorado has eroded the fresh sediments and transported them to the west.

It is noticeable that the south-facing surfaces of the Book Cliffs are made of stone, while the north sides are made of loose conglomerate. This recurring pattern continues to the north for many miles. Stone Age carvings all over the world show figures [Otte 2008, 495] which correspond to plasma phenomena [Perratt]. The figural representation and location indicates a phenomenon over the south pole [Sluijs/Peratt]. The carvings show the phenomenon from different angles according to the latitude and in different stages of its formation. It is possible that a super-aurora over the South Pole of the Earth has caused a greater fossilization on the south sides of the Book Cliffs, but also on other mountains.

Even the Grand Canyon of the Colorado can be viewed from this vantage point with new eyes. Previously [Otte 2008, 490] it has been speculated that the canyon is more or less the result of intense electrical activity (lightning strike). Taking into account Michael Steinbacher’s ideas, the electrical portion would have to be reduced to a point where the electrical event just fossilized the formation, while the canyon itself was caused by the wet process described above. The Colorado flowed through its bed before the event. Below the Kaibab Plateau and south of it, one would expect dunes in this scenario. A connecting mountain has never existed; the Colorado would have hindered its development by washing away the material. These dunes would have been completely covered in a large flood event (‘Slosh’). With the water level falling, the Colorado flowed again and created the huge canyon by slicing through the fresh sediment, possibly within a few weeks or months.