Oil and coal » Petroleum and coal in the electric universe

In an Electric Universe, the abiogenic-cosmic explanation for Petroleum regains a lot of weight. The basic idea is an extraterrestrial deposition of a large part of the material in question within several catastrophic episodes. It might have been deposited in the form of a chemical precursor of petroleum. This idea is not new [Velikovsky 1950, Cardona], but it gains credibility in combination with the new approach to the Geology of the Electric Universe and has a high explanatory power for the many inconsistencies that have been shown above.

These considerations do not exclude the biological production of petroleum on Earth. They also do not exclude the option that stored hydrocarbons from the inner earth are gradually released towards the surface. But they attribute a large part of the currently existing hydrocarbons on Earth to an external source. This material came down to the surface together with large amounts of other extraterrestrial matter and sedimented in many parallel layers and in a short time. For dolomite an extraterrestrial deposition on Earth has been already been considered. Petroleum in dolomite may have been deposited easily together, which is also compatible with the more recent notions on the porosity of dolomite. The mixing with organic material present at that time on the surface is also possible without problems. It would explain the biomarkers, as well as the diverse fossils found close to it. In the older Precambrian times, with less available organic material, the organic signature of the oil is correspondingly smaller. This is again observed. Also the large amounts of gas hydrates found under ice in permafrost regions (e.g. Alaska) and in sediment filled basins under water (e.g. Carolina Trough) [USGS] could result from hydrocarbons raining down on earth and being stored in basins with the sediment.

For the required pressure and temperature to synthesize hydrocarbons – even at and/or close above the surface – the z-pinch effect is available. This is also a possible explanation for geodes (a rounded cavity bounded by a single outer rock layer), which may sometimes contain oil inside [Corliss 1990, 63]. They would be produced on or close above the surface and contain the material, which was at that time present in the atmosphere. Electric effects are also able to explain petroleum in base and metamorphic rocks, as this rock would be produced at the surface and can optionally include oil.

The introduction on the Electric Universe Geology already mentioned the Book Cliffs in Colorado, which are regarded as the result of a ‘slosh’ (a global incursion of the oceans over the continents). The south side of the cliffs is also the south side of the Uinta Basin of the Green River Formation (Fig. 1). This basin formation would allow a natural confluence of extra-terrestrially supplied petroleum with other materials. The creation of shale could have been electrically supported and could have generated the impenetrable oil shale, whose industrial development was made possible only in recent years. The Book Cliffs, lying partially above this formation, contain coal seams quite close to the surface (Fig. 2). Where the sediment which, according to the prevailing doctrine, must have compressed the plant material into coal went remains an open issue [Corliss 1989, 188-189]. 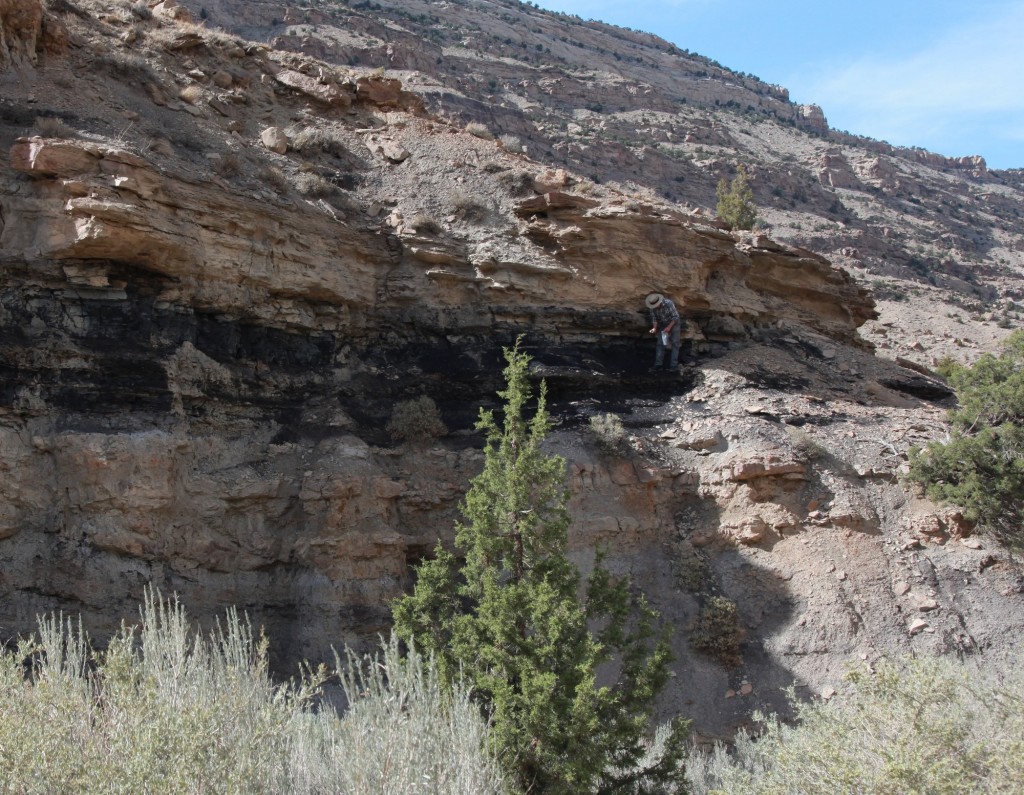 For coal, at least for the black coal, an abiogenic origin alternative should also be considered. Similar to petroleum, the opinion that all the coal seams are actually incurred from plant material must be challenged. In the sediment layers above and below the coal layers, there are large collections of plant fossils that have not been transformed into coal [Cardona, 44]. Why, when heat and/or pressure are responsible through the sedimentation process?

Another interesting variant is the deposition of coal within dune-like structures such as observed northwest of the Valles Caldera (Los Alamos, New Mexico) on Highway 96 (Fig. 3). How was the coal deposited in this form at this location? Could wind deposition play an important role here? 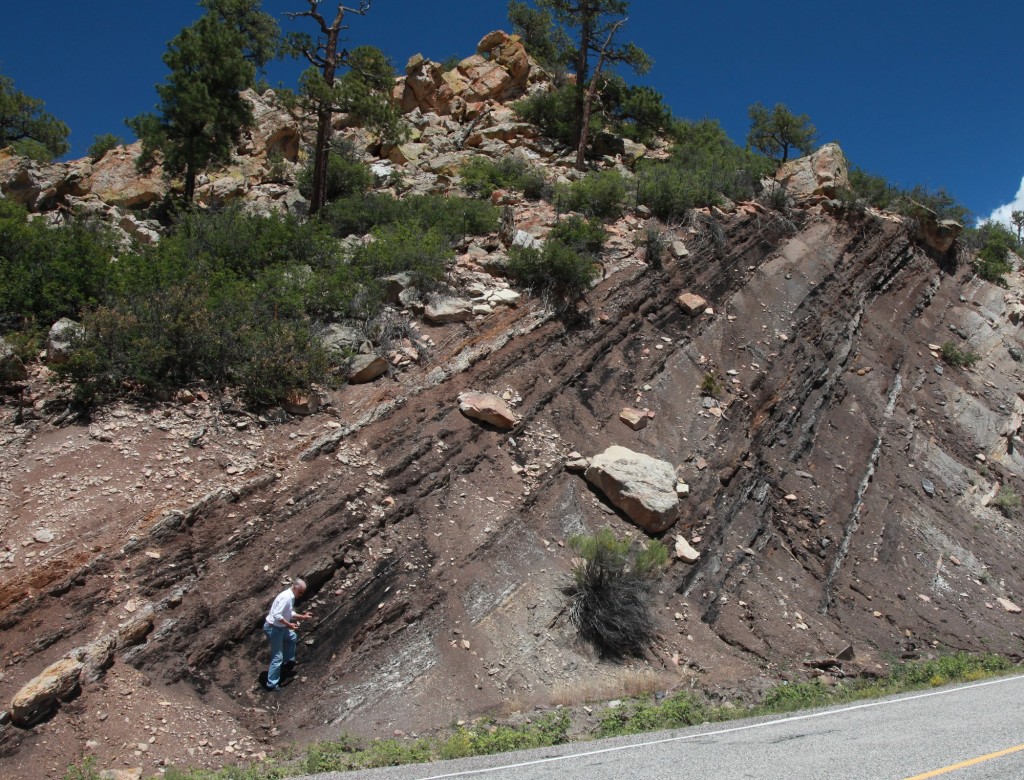 Besides the typical horizontal sedimentary deposits of coal, intrusion or vein-like structures made of coal exist, such as in Summerset, Ohio. Coal covers an elevation of shale; which in turn has sandstone deposited on top of it. The coal is not cut off from the sandstone, but fingers literally into it (Fig. 4). A similar situation is found with the so-called New Brunswick Albertite from Canada, an asphalt that looks very similar to coal. It was most likely liquid when it was distributed vein-like into the soil [Corliss 1989, 189-190].

Within coal are sometimes found (as mentioned earlier) uprooted tree stumps – not transformed into coal – or even more interesting: still rooted tree stumps – also not transformed into coal [Cardona, 42]. Many plant remains, and insects too, although torn to pieces, are preserved in the coal with fine structures still recognizable. But they also have not been transformed into coal [Cardona, 46]. One of the most memorable descriptions of the paradoxes of fossil formation comes from Heribert Nilsson in 1953 [Nilsson, 555-645]. He concludes the section of his work for the formation of fossils with the following words:

The Evolution of the earth may not have been a quietly running process. Such an assumption leads, as has been shown above over and over again, to a denial of the facts that everyone sees every day before his eyes.
Although geosynclines in the past have existed, although they are now nowhere to be found on Earth, even if they have been filled during millions of years with sediment, so that finally all the mountain ranges were deposited in them, which is hardly likely,
it is quite incomprehensible how fossils in huge deposits could be stored, often included freshly, since we know that in the sediment in our days no such thing takes place,
and it is quite incomprehensible how the worldwide soaring mountain ranges at last raised from the hypothetical geosynclines by itself.
The geophysical, bio-geographical and paleobiological events that must have taken place during certain periods, especially during the Earth revolutions of the geologists, took a very different course and have seen very different forces acting than those we see today in the chiseling of earth or which we have accepted as having sculpted it before.
We need to look for the power play, which has caused the Earth revolutions and under which the seemingly irreconcilable and incomprehensible phenomena of Earth can be classified and made understandable. [Nilsson, 644-645, translation AO].

Immanuel Velikovsky mentioned Nilsson’s work as support for his views in Earth in Upheaval [Velikovsky 1955, 219]. Nilsson mentioned Velikovsky’s Worlds in Collision [Nilsson, 653] when it came to the question of how the presented paleobiological points of conflict can be resolved. Nilsson solution is in any case a catastrophic one that most of today’s biologists would consider strange [ibid, 733]:

We are trapped by the idea that the fossils were deposited at the bottom of a lake basin or need a sea to be subsequently overlaid by sediments and be preserved this way. But something like this does not take place today. There is a sedimentary deposit, but what comes of it? Sapropel and gyttja in lakes, limestone sediments and red clay in the deep sea, at the estuaries sand and clay. Creation of layers with fossils or imprints of organisms are found nowhere else in the world in the making, at least not other than by chance.
Under such circumstances, it is not right and not scientific to take today’s processes as a starting point for the explanation of prehistoric phenomena because those are not sufficient in any way and therefore only lead to the strangest inconsistencies and greatest improbabilities. With these I have already been able to fill two chapters, and the examples could multiply very easily a hundred times.
The stratification of the fossil-bearing rock types must be a process that has a very different formation history than the present smudge or mud bogs. Such an assumption is a false analogy, perhaps one of the most dangerous and most comprehensive ever to spread in the history of science itself. [Nilsson, 647-648, translation AO].

Nilsson mainly saw the forces of water in action. However, it is conceivable that the coal was raining in a disaster from the sky; it was deposited in layers and buried – organic or not – with what else fell victim to the disaster. In these freshly deposited coal beds – sometimes in the form of dunes – dinosaurs and other surviving animals could easily leave their marks. Other inclusions in coal seams, such as large boulders that were moved over long distances [Corliss 1989, 191], also speak for the catastrophic approach.

Very special inclusions in coal are fossilized remains of human bones, such as the already mentioned case in Macoupin County. This is not an isolated finding; some cases have been documented [Corliss 1994, 59-74]; although the risk of counterfeiting is always present. Such findings can of course not exist according to the prevailing doctrine, because it would either lower the age of the affected coal seams dramatically or increase the age of human remains drastically. Because of those circumstances, the analysis and verification of these reports is very difficult. They would, however, readily and chronologically fit into the scenario of the Electric Universe. This of course means that the current dates of the world ages require detailed examination, since they are made on the basis of entirely different assumptions.

Back: Oil and coal