The most common type of metamorphic rock is created through regional metamorphism – large areas of the crust are exposed to high pressure and high temperature. Magma intrusions can cause the so-called contact metamorphosis to directly adjacent rocks, another typical type of metamorphic conversion. Less common is hydrothermal metamorphism by penetration of seawater into basalt causing a chemical reaction. The shock or impact metamorphosis, by which impact energy is converted into heat and pressure which then changes the structure of the rock, is also less common.

If sediments descend deeper the processes of diagenesis goes over into the burial metamorphism, which is a low-grade variant of metamorphosis. The degree of metamorphism increases with pressure and temperature. In the figure the specified depth data must be treated with caution because subduction zones (volcanic arcs), zones of crustal extension (continental plate) and regions of consolidated lithosphere have very different temperature gradients. The process that converts rocks by high-pressure (8-12 kbar) and ultrahigh-pressure metamorphism (more than 28 kbar) and brings them back to the surface is poorly understood and still subject of a hot debate [Grotzinger/Jordan, 152]. 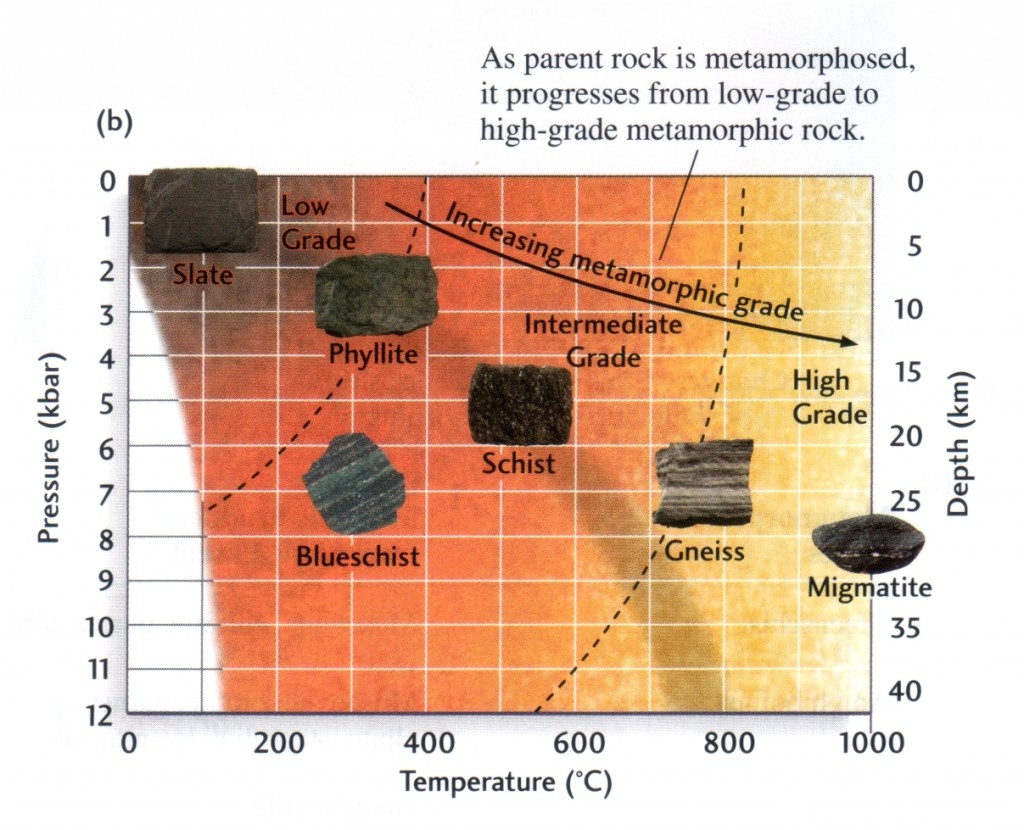 Metamorphic rocks are divided into two large groups: The first group is characterized by isotropic structure. They consist mainly of isometric crystals. This class includes marble, hornfels, quartzite, greenstone, amphibolite and granulites. The other major class of metamorphic rocks is characterized by foliation. These include slate, phyllite, mica schist, gneiss and migmatites. With increasing degree of metamorphism, the distance of the foliations increases; it creates distinct bands, occasionally confused zigzag lines. The overall process of rock metamorphism, the emergence of the so-called metamorphic facies, is influenced by the following factors: the composition of the parent material, the degree of metamorphism and their types. The question of the source rock is further complicated by the fact that a rock can be exposed repeatedly to the metamorphosis process. Furthermore, the concept of metamorphosis degree is purely static. It is indicated by the maximum pressure and maximum temperature. The process itself is instead highly dynamic. The descent and ascent p-T paths (pressure-temperature paths) can be quite different. There is also a temporal component. How long was a rock exposed to what pressure and temperature? At the office door of a geologist from the Southern Utah University the following quote from Professor Frank L. DeCourten has been found, which aptly describes the situation:

Geologists who specialize in the study of primeval metamorphic rocks are to be commended for their valor, admired for the difficulty of their task, and, perhaps, consoled for their lunacy. [Steinbacher, 589]

Rocks are transported and transformed on winding paths through the Earth’s interior. How exactly that works is still unclear, because it is difficult to explain that with neighboring rock only a part is affected by regional metamorphism, while other directly adjacent parts are apparently not affected.

Next: The Dolomite Problem

Steinbacher, Michael (2011): A new Approach to Mountain Formation; in Proceedings of the Natural Philosophy Alliance. 18th Annual Conference of the NPA, 6 – 9 July 2011 at the University of Maryland, College Park, USA; Mt. Airy, 584-590